The last few days have been quite busy and although I failed to get any writing in, life just sometimes happens, I did manage to slip in a few workouts. Since I began strength training, I am learning to live with waking up feeling like I have been hit by a truck full of cement going at top speed.  Some days I find myself waking energized and refreshed, other days I wake up wondering if I should be cast into a zombie role on the Walking Dead. I think I need to increase my water intake, work out a little earlier or layout in the beach somewhere in the Caribbean for a month or five. Since the latter is probably not a realistic option at this moment, I will start with increasing my water.

As far a nutrition goes, I am always looking for creative ways to cook chicken in my Instant Pot.  I tend to reach for chicken as my “go to” meat and after a while I find that I am eating the same things over and over. The other night, while stalking my spice cupboard for something different, I noticed a few packets of Lipton Onion Soup mix. Hmmm…I opened up a packet, dumped it on a plate, and rolled boneless chicken thighs in dry the soup mix. I added a cup of water to my IP, put the chicken thighs on the trivet, and then set the time for 13 minutes.  After my IP finished its natural release, I opened up the lid to find absolutely perfect boneless thighs. Fabulous!

Time to hit the gym!

Since I started working out 12 days ago, I have only missed 1 day at Planet Fitness and I intentionally skipped that day to give my right hip flexor a break. Apparently it doesn’t like the elliptical either. I have watched others hop on this machine and stay on it like they are running cross-country with Forrest Gump. I get on the elliptical and more closely resemble a banana slug that is pretty much starting to dry up from the heat while halfway across the road.  So, no, I am not killing any records but I am at least putting in 30 minutes a day and also using the Total Body Workout at the gym.

That brings me to this….

So, for 12 days I have changed my lifestyle. I had actually started earlier in the year but I started keeping an accurate accounting of it 12 days ago. This morning I climbed on the scale eagerly looking for results and once again I was ready to  return the scale to the store due to inaccuracy; I was only down 2 ounces.  Insert adult language that you wouldn’t use around your mother right here _____________.  It was then that I had to put it all in perspective. I am down 6 lbs since I began 12 days ago which averages out to 1/2 lb per day.  And, I have noticed a change in how my clothes fit, so this was a reminder not to get hung up on the numbers and keep it about a healthy lifestyle.

My son called me early this afternoon sounding like he had landed a part in the Walking Dead, he left work early with the flu.  At my house flu means homemade chicken noodle soup, however, I didn’t want the carbs so I ate mine without the noodles. And no, I didn’t do this in my Instant Pot, this is a soup I love to cook on the stove. 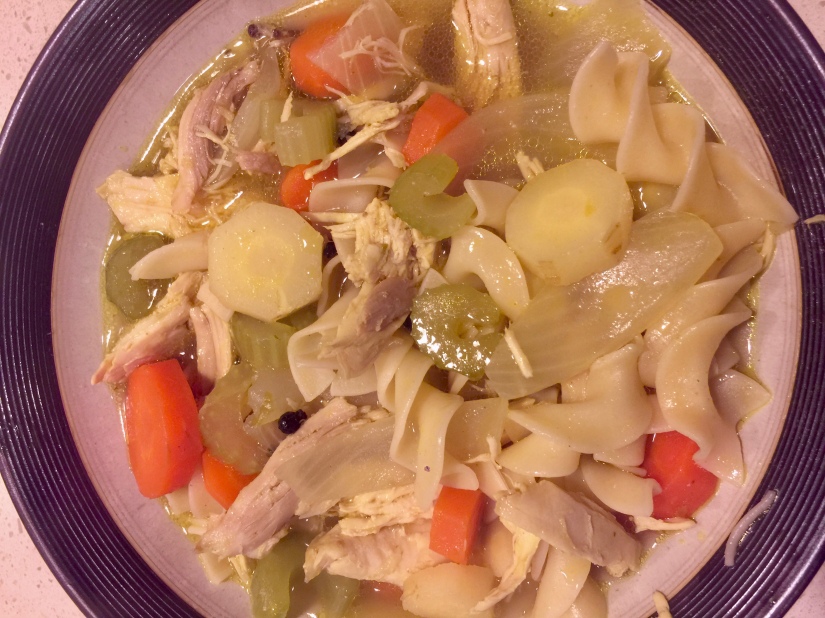 Tomorrow I may just have to try out that elliptical again cause “Stupid is what stupid does.” ~Mrs. Gump

Today was my first day back to Planet Fitness in three years in my attempts to lead a healthy lifestyle.  After my workout, I was reminded of a post I had once written regarding that iconic scene in Flash Dance where Jennifer Beals is dancing, sits down on

a chair, arches her back and pulls on a cord that dumps water all over her body.  I experienced the same thing after my workout except I was in a chair, hunched over with sweat pouring down me as though I was at the threshold of hell.

As I continued my journey into the abyss, I came home from my workout and threw a whole chicken in the Instant Pot and a second one was in line to be cooked, shredded and frozen. Once the Instant Pot finished its ‘natural release’ with the first chicken, I pulled that baby right out of the pot and the meat was falling off the bone. I began to slice into the chicken and then noticed that it wasn’t completely cooked all the way through. Perhaps the issue is that I usually cook with wine, but this time I hadn’t poured a glass….

As I previously posted, my first whole chicken in the Instant Pot was full of flavor, however, it came out looking like one of Picasso’s paintings where everything on the face is reorganized, except it’s a chicken.  I decided that I wasn’t going to be defeated that easily and needed to try cooking a whole chicken once more. This time I decided not to sear the chicken in the IP, like the recipe called for, since a greased chicken stuck to the pot isn’t easy to pull out.  I had tried hoisting it out with a wooden spoon in its cavity and I tried a turkey lifter which pierced clean through the breast of the chicken. In the end I just had to reach in and grab it by the legs and broke a leg in the process.  This debacle happened in the searing process, I hadn’t even gotten to cooking the darn bird. I thought I deserved a second chance, this time with no searing involved, so I sent a text to my husband asking him to pick up another chicken.

I found this wonderful shop in Leavenworth, WA called Cup and Kettle that carries all kinds of ‘Shit” products AND they ship! You can get “Shit” seasonings for just about anything” and they also carry amazing tea. You can also purchase Chicken Shit and other Shit seasonings directly from the manufacturer.  Back to the chicken…the first time I cooked my bird in the IP, I set it for 25 minutes as directed and it cooked perfectly. 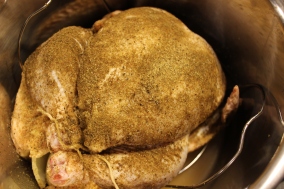 So once again, I placed it in the pot and set the cook time for 25 minutes.  Ah…so much easier the second time around.  When the time was up and the IP had finished its Natural Pressure Release, I opened the lid without fear and pulled that bird right out. It was perfect!  Since my husband was hovering over me like he hadn’t eaten in 3 days, I began to pull the chicken off of the bone for chicken tacos.  Oh my gosh it was so incredibly juicy!  As I got closer to the bone I suddenly realized that it was not fully cooked!  I turned to my husband and said, “Was this chicken the same size as the other one you bought?” “No, I bought you a bigger one this time.” Insert image here of Star Trek’s Captain Picard doing a facepalm. I had set the timer for a smaller chicken and now it wasn’t fully cooked. Ok, no biggy, I just had to put it back in the pot and set it for a few more minutes.  I set the timer and walked away.  As I was sitting in my home office I suddenly heard the now familiar, loud psssshhshhhh that the pot makes during a quick release…BUT WAIT…I wasn’t doing a quick release!  I yelled to my husband, who is in the kitchen ignoring the fact that the pot was screaching,, “OMG! I DIDN’T SEAL THE VALVE!” He quickly turned the valve to seal and I sat in silence from the other room waiting for some sort of apocalypse to occur. Nothing. I headed into the kitchen wondering how I could have screwed this up a second time.  When the timer was up and all of the steam had escaped, I opened the pot, pulled the remainder of the chicken out and checked to see if it was cooked.  It was!

*Note to self: Next time check how many pounds the chicken is before setting the timer.